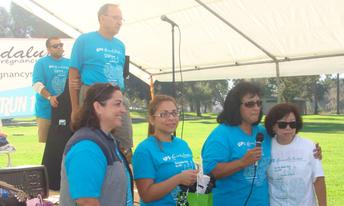 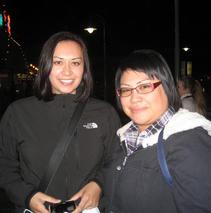 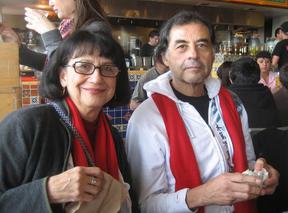 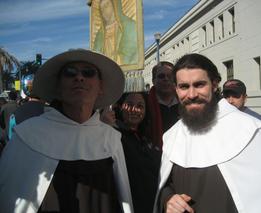 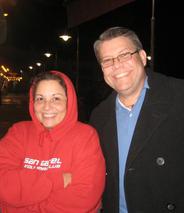 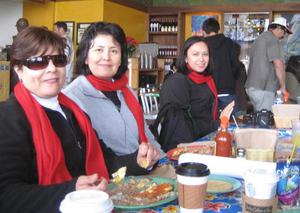 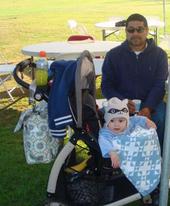 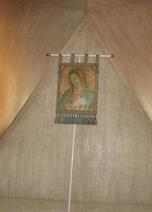 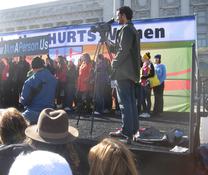 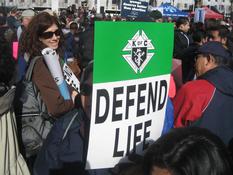 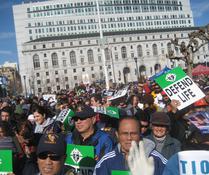 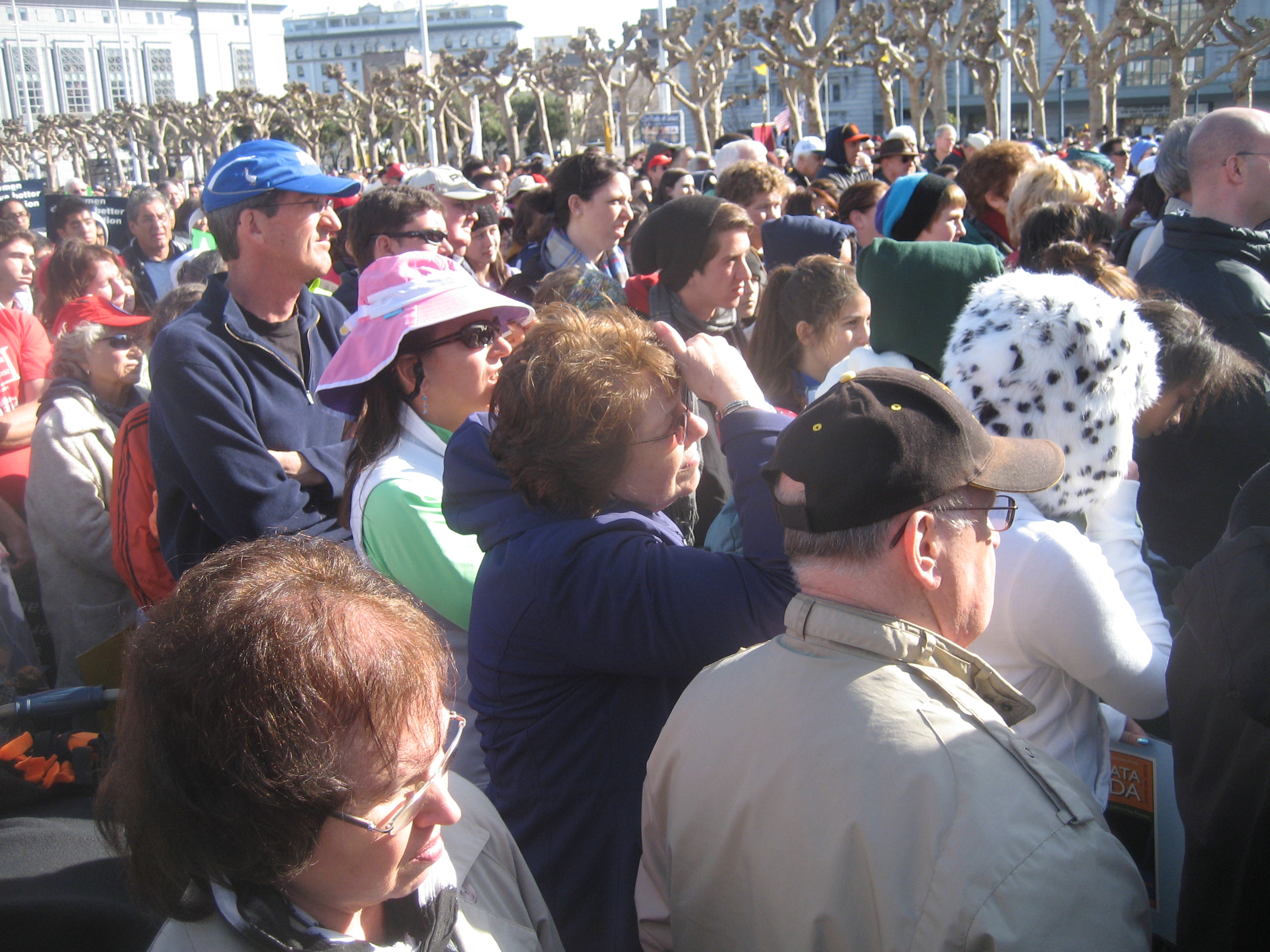 Civic Center
Rally
In July of 2012 our community rejoiced in the news that a long time abortion clinic in Rosemead closed its doors forever. The vacant building sits silent like a tomb after nearly 16 months because of the many prayer warriors who for years prayed, fasted and held thousands of hours holding vigil in front of that clinic. They stood up for those who had no voice. Now - the bloodshed has stopped there. But what about the others.
It's time once again to be  united with hundreds of other cities around the world for the largest and longest coordinated pro-life mobilization in history: the 40 Days for Life campaign. Recognizing that with God all things are possible, people of faiths have been praying that this effort will help bring an end to the tragedy of abortion.
40 Days for Life is a focused pro-life campaign that has already mobilized over 500,000 people worldwide, saved more than 5,000 lives from abortion, led to the conversion of 61 abortion workers, and seen 19 abortion facilities close. 40 Days for Life is made up of three components: Prayer and Fasting, Peaceful Vigil and Community Outreach. 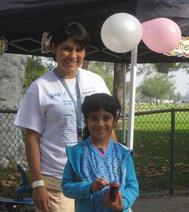 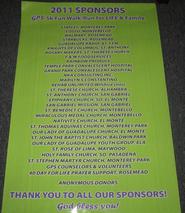 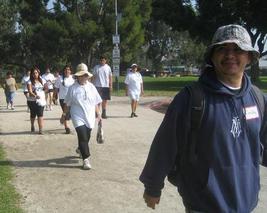 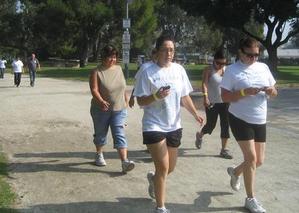 LIFE IS SACRED!
Spring 2012 40 Days for Life Kick-off Rally before FPA closed their doors in July 2012!
Thank you to our wonderful clients, friends and volunteers
who have been part of GPS through the years!
2012
2016
2013
2010
2011
5K Fun Walk/Run for LIFE
Whittier Narrows Regional Park
October 15, 2011
Rosemead Family Planning Associates
closed their doors in July 2012!

2015
"LIFE of the World" (John 6:51)
Honoring the Sanctity of LIFE
5th Annual Fundraiser
2015 Benefit Dinner & Silent Auction
Saturday, December 5,  2015
We are pleased to announce that our guest speaker this year will be
Steve Karlen, North American Outreach Director for 40 Days for LIFE.
Steve has always been pro-life, but, like many people, he never really did anything about it. All of that changed when his wife found out that a friend was pregnant and planning to have an abortion. Steve and his wife rushed to her aid—an experience that moved them so deeply that they got involved in the pro-life movement by volunteering for their local 40 Days for Life effort.
Just months later, Steve found himself at the center of a nationwide controversy as he helped lead an effort to prevent the University of Wisconsin from opening a late-term abortion center. Steve responded courageously, working through the media and organizing thousands of volunteers.
Steve went on to incorporate a local pro-life organization and was then quickly asked to serve as a leader on the state, national, then international level.
Steve has shared his message in 35 states, Washington, DC, four Canadian provinces, and Mexico City. He and his work have been featured on American Family Radio, EWTN, the Christian Broadcasting Network, NBC, CBS and Fox affiliates, as well as numerous newspapers and radio stations.
Steve lives in Madison, Wisconsin with his wife Laura and his children, Peter, John Paul, and Teresa.
Prayer Invocation:  The Most Reverend David G. O'Connell
The Most Reverend David G. O’Connell is the Episcopal Vicar of the San Gabriel Pastoral Region, one of the five Pastoral Regions in the Archdiocese of Los Angeles. He was appointed Titular Bishop of Cell Ausaille and Auxiliary Bishop in 2015.
Bishop O’Connell received a BA in Philosophy and English Literature from the University College Dublin in 1975, a Bachelor of Divinity from Maynooth College in 1977 and a Masters of Spirituality from Mount St. Mary's College in 1987.
Since his ordination to the priesthood, he’s served as Associate Pastor at St. Raymond in Downey, St. Maria Goretti in Long Beach, and St. Hillary in Pico Rivera, and then as Pastor of St. Frances X. Cabrini, Ascension Catholic Church, St. Eugene and St. Michael Parishes.
He also served as a member of the Priest Pension Board, and currently serves on the Together in Mission Board as well as the Archdiocesan Finance Council, and continues to be a long-time member of the Council of Priests. He is a Knight of Peter Claver.
In his pastoral ministry, Bishop O’Connell has always been very active in serving those in need.

Mark your Calendar for the WALK for LIFE
West Coast 2014 in San Francisco.
Saturday, January 25, 2014
Guadalupe Pregnancy Services will be there! 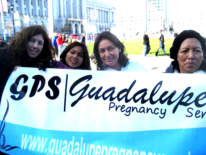 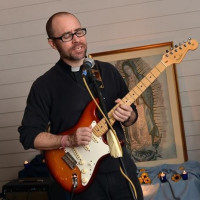 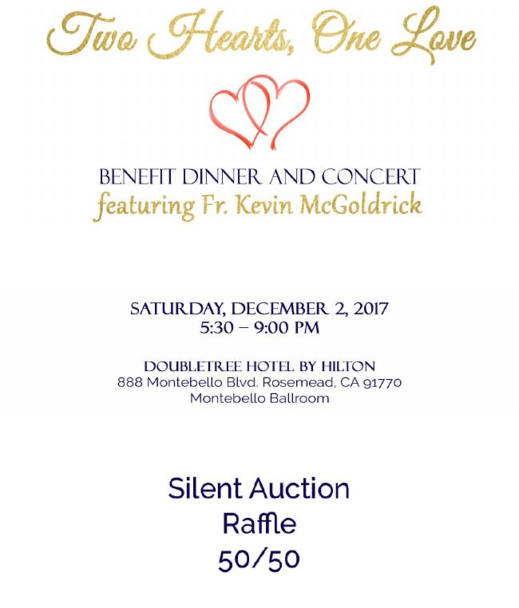 Guadalupe Pregnancy Services would like to request your presence at the 4th Annual Year-End Benefit Fundraiser to bring awareness and support to the wonderful work being done to help women turn their lives around with counseling and education while providing resources for them and their babies.
Prayer Invocation: Fr. Philip Sullivan OCD
Pastor-St. Therese Church, Alhambra CA
Fr. Philip, the fifth of six children, was raised, together with his three brothers and two sisters, in
a good Catholic family in Garden Grove, California. His father, Richard Sullivan, was a Junior
High School teacher and his mother, Shirley, was (and, at the age of 80, still is!) a physical
therapist. While in high school, Fr. Philip's family moved to Arizona. Upon graduation from high
school, he attended Arizona State University with the hope of earning a degree in illustration.
As a young adult, Fr. Philip worked for many years in the restaurant business in Phoenix, Arizona, and in Orange County California. With the encouragement of his father (who had once tried his own vocation as a seminarian), his mother, and a diocesan priest friend of the family, he began to consider a religious vocation. In discerning his call to the priesthood, he considered nine other religious communities and the Diocese of Orange before deciding that it was with the Discalced Carmelite Friars that he felt at home. Fr. Philip entered the California-Arizona Province of the Discalced Carmelite Friars in 1998 and made his first Profession of Vows in 2000, taking the religious name Philip of Our Lady of Guadalupe because of his special devotion to her. After seven years of study at Mt. Angel Seminary in Oregon, Fr. Philip was ordained as a priest in 2007.
Since his ordination, he has served the Province as an Associate Pastor of Santa Cruz Church and as Pastor of St. Margaret Mary Church--both in Tucson, Arizona. In the summer of 2011, he was assigned as Pastor and Superior of St. Therese in Alhambra, CA. He also serves the Province as a member of the Provincial Council (elected in 2011 and reelected in May 2014).
A well-known fact about Fr. Philip is that he has a great sense of humor. A little known fact is that he is an accomplished iconographer and character artist.

Sister Paula Vandegaer, L.C.S.W., founder of International Life Services, Volunteers forLife, and Scholl Institute of Bioethics. Sister is an internationally recognized leader in the pro-life movement and has trained, ministered, and inspired thousands. She is best-selling author of the first textbook written for today's pro-life counselors, "Introduction to Pregnancy Counseling." Sister's experience, energy and passion for pro-life work make her one of today's most popular speakers.
Sr. Paula has a Masters in Social Work from Catholic University of America in Washington, D.C., with a specialty in Psychiatric Casework and has a B.A. in psychology from Immaculate Heart College in Los Angeles, California.
Keynote Speaker: Patrick Reidy, Theology of the Body

After receiving his M.A. in Spanish Literature from Indiana University, Pat worked for the National
Evangelization Teams, speaking publicly and leading bilingual retreats around the country for
several years. Later he entered St. John Vianney Seminary in Denver, Colorado, where he completed
his Bachelor of Philosophy and two partial theology degrees and taught adjunct classes in Spanish
and philosophy. Pat began his study of the Theology of the Body in 1999 in Denver before moving to
the Chicago area where he began to collaborate with Fr. Thomas J. Loya as a board member and
speaker for the Tabor Life Institute. Pat has spoken extensively on the Theology of the Body in states
across the U.S. as well as in Mexico and yearly in Peru. He adapts his dynamic presentations for audiences of varying ages and backgrounds, from teenagers to college students, single people to parents, business men and women to priests and religious. Pat has developed a fifteen-hour course that he teaches annually at St. John Vianney Seminary in Denver and to working professionals in Lima, Peru.
Currently he serves as the Head of Faith Formation at JSerra Catholic High School in Orange County, California and as Founder and Director of Assumption Institute for bilingual studies of the Theology of the Body.

Thank you, Fr. Kevin McGoldrick, for your awesome performance at our 2017 Benefit Dinner/Auction/Concert Fundraiser! 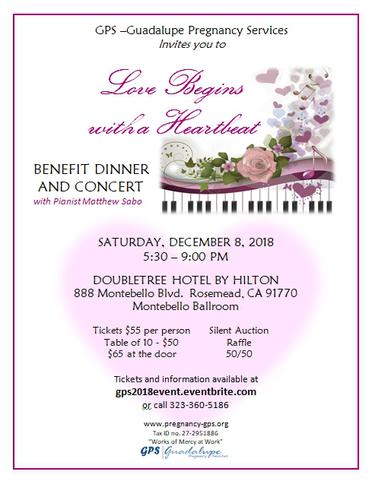 Congratulations to Ken Keller, who completed his Mission Walk for Life in a record-breaking 54 days, for a total of 798.7 miles! The purpose of his spiritual journey was to promote Life and to support GPS.  We are honored that Ken chose to support our mission in this way!

Click HERE to learn about
Mission Walk for Life.
2019
Thank you for a successful, enjoyable 2019 Benefit! 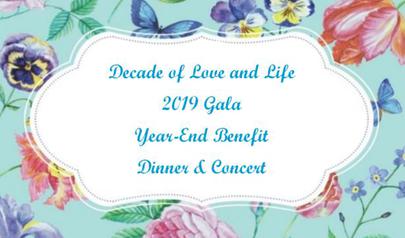 Thank you to everyone
who supported our
10th Anniversary
OPEN HOUSE! 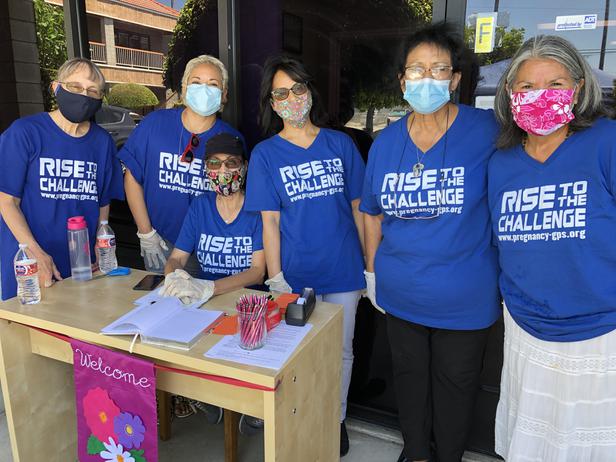 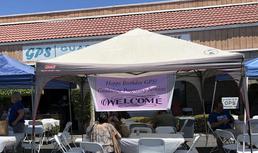 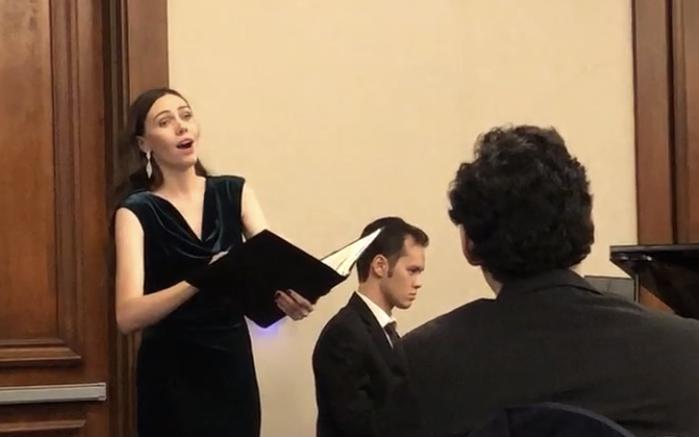 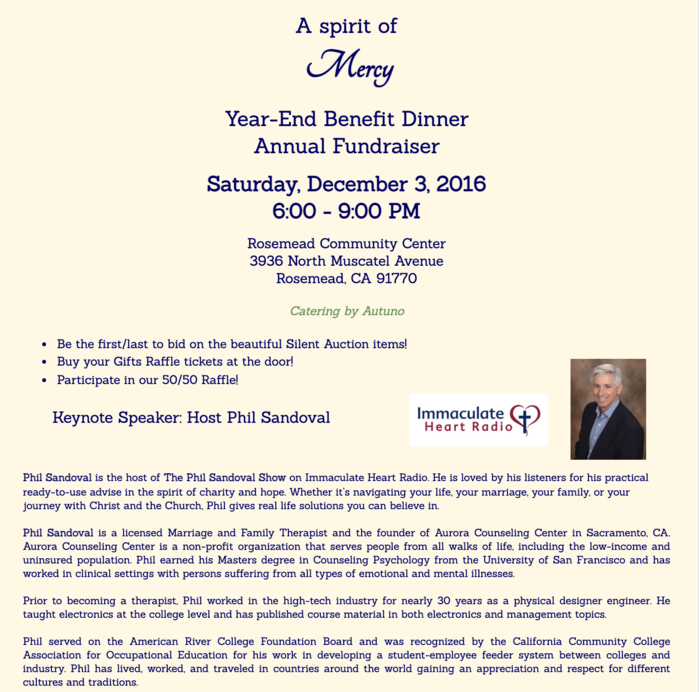